This is the place to post reports from in-person meets!
Forum rules
DO NOT post the location for on the street meets. To keep the spots from being too crowded, we don't allow locations to be posted. You may only post location details about pay meets and organized free signings.
Post Reply
8 posts • Page 1 of 1

A few days ago, I decided to attend Tommy Dreamer's House of Hardcore 12 at the Elmcor Youth Center in Corona, NY (in the Queens borough). I bought a 2nd row ticket with the intention of staying for the entire show but, alas, plans changed yesterday evening. I was dead tired and felt a little out of it; plus, I was making the trip from NJ to Queens via public transportation and belltime was scheduled for 8:00 PM, meaning the show would be over by 10:30 or 11 at the latest. I would get back home by 1 or 2 AM, way too late for me.

Anyways, there was a pre-show meet and greet scheduled for 6:00 PM so I took a bus that got me into Port Authority at 4:15 PM. While walking to Penn Station I spotted actor Alex Karpovsky, who plays Ray Ploshansky in the HBO series Girls. He went into a store that sells knock off sneakers and jerseys and I casually followed him inside, hoping to score a pic. He was in the store for a only a minute before leaving. We actually walked together a few blocks but eventually had to go our separate ways. He was also on the phone and the streets were so freaking congested with people -- it would've been close to impossible to ask him to stop for a pic. Oh well.

I got to Penn and boarded the 4:45 PM LIRR train to Flushing Main Street. I arrived there roughly 15 minutes later and took an Uber to the Elmcor Youth Center. I arrived at 5:30 PM and saw two or three people waiting by the doors. I killed sometime outside talking to my girlfriend on the phone before going in and claiming my tickets. While there, I saw Beulah talking to the ticket vendor.

A couple of minutes before 6:00 PM, they told us we could go down to ringside for the start of the meet and greet. I first went to my seat -- Section A, Row 2, Seat 11 -- and scoped out the surroundings. I saw Rhyno at his table but didn't have a need for him.

I spotted Sami Callihan heading for his table and decided to get him in my NXT program. I was the one of the first to approach him and he offered me a deal: $20 for a t-shirt, autograph, and photo op! I jumped at the offer and got his green "Death Machine" t-shirt. He signed my NXT program and we took a selfie, which I hate, but nobody was around to take the picture for us. Boo.

Lance Hoyt was seated to his right and decided to get him in my Encyclopedia (he was known as Vance Archer in WWE). A combo was $10.00 but the selfie came out blurry. No worries, I'd get a cooler photo op with him later.

Tommy Dreamer was up next and he was talking with a bunch of locals. I waited for him to finish a story before asking him how much a combo would be. He whispered to me, "I don't charge at my shows."

That's right, folks. FREE combo. I got him in my Encyclopedia. I'll definitely attend the next HOH that's in Queens with the intention of loading up on Dreamer 'graphs.

Up next was Little Guido who offered to sign both entries in the Encyclopedia and take a photo for $10!!! Little Guido was definitely very awesome.

As I walked away from Guido's table, I heard Colt Cabana shout at me "What about Goldman?!?! You got Goldman in there?!?!" I told him I got him last year and he chuckled and said it was cool. I remembered I actually had something for him to sign -- a GFW program he's featured in. He signed it for $5 or $10 bucks (can't remember). He's super nice and funny, love Colt.

Chris Hero showed up and his line quickly grew. He was offering $5.00 combos. I had him sign a ROH Program/Poster thingy and we took the photo. What a cool guy and a phenomenal wrestler as well.

Next was Davey Boy Smith Jr., who finally showed up. I decided to get his autograph for $10 and a KES photo op for $20. I just realized I missed the opportunity to get him in the Hart Dynasty section...whoops. Next time. I got to pose with the GHC Tag title, which is awesome.

Bull Dempsey also made his way over and was offering FREE combos. I got him in my NXT program. Awesome guy.

Finally, I spotted Thea Trinidad in ring gear. She was talking to two guys at her table for nearly the entire signing period -- they finally left and I approached her. She said she had to go (she was opening the show) but I asked her to please sign my TNA program and she agreed. She signed the Rosita entry. Before I could ask for a pic, she bolted to the back. Oh well.

The show then began and they had a moving tribute to Balls Mahoney. The action was great. Intermission came at roughly 9:45 PM and Rob Van Damn, who looked VERY..."glazed over"...came out to sign. I skipped out on RVD because I cleaned up on him at Big Event.

I left during intermission.
---
All in all, a VERY successful score for me. Very happy I went. Next time, though, I'll be more armed with things to get signed and I'll probably just buy a GA ticket since I likely won't stay for the entire show.
Feel free to visit my blog concerning wrestling conventions, signings, and meet & greets!
https://squaredcirclecons.com/
Top

Nice stuff. I went to the first-ever HOH show in Poughkeepsie and was able to get a bunch of first-time ECW and other meets done without spending a whole lot. It's nice when you can interact with the wrestlers and work out deals without handlers at some of the indy shows (other times the promoters and vendors control the prices). I thought Nicole Bass was a fan doing a Balls Mahoney impression. She looks just like him.
Top

Cabana is a hustler lol
Top

Luke wrote:Cabana is a hustler lol

He is but I love him lol. He's so friendly, really fun to talk to.
Feel free to visit my blog concerning wrestling conventions, signings, and meet & greets!
https://squaredcirclecons.com/
Top

Great stuff, this had a pretty solid lineup.

I still can't believe all Hero had to do was lose a bit of weight and he would have likely made the main roster. What a shame, as he had all the tools.
My collection:
https://www.flickr.com/photos/woodmo/albums
Top

I still can't believe all Hero had to do was lose a bit of weight and he would have likely made the main roster. What a shame, as he had all the tools.

Hero is a beast. Would have been perfect for current NXT and eventual main roster. I will say Hero looks slimmer now. There was a point not too long ago that the guy had to weigh over 300lbs. It was REALLY bad. Yet he was still wrestling 5 star 60 minute matches. 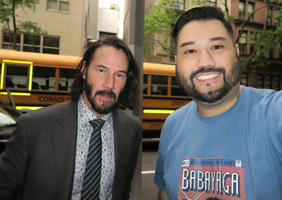 Awesome report! Very cool to hear that most everyone working the show were very reasonably priced. Looked like a great time...
Top