This is the place to post reports from in-person meets!
Forum rules
DO NOT post the location for on the street meets. To keep the spots from being too crowded, we don't allow locations to be posted. You may only post location details about pay meets and organized free signings.
Post Reply
3 posts • Page 1 of 1

Now for some fall horror shows, and roadway/roadside antics with a deer and freight train so read up!

Well wouldn’t have thought my first Monster Mania show since August 2019 would be in crummy Oaks. Can’t say I was pleased to be back, as the Philly Expo Center is truly in the middle of nowhere, and is probably 40 minutes or so farther than Cherry Hill. With this con, I have now been to this dump for FIVE different conventions (Retro Con, Monster, Greater Philly, Motorsports, Too Many Games)! The drive down was mostly normal, aside from nearly colliding with a DEER! A male buck was trotting along the side of some country road as I drove along, then it decided to PASS ME on the right side!!! I had to slam on the brakes, even though I was only doing 20-25 mph, to avoid this thing.

Bought the wristband and went in, quickly joining WOODMO

. Will say it was nice to have wide open space to wait in the lines, as opposed to the cluttered Cherry Hill hotel and even worse, the one they use in Hunt Valley. The downside was terrible lighting for photos. Dana or his fiancée stood in one of the longer lines while he and I scooted around the floor. My primary gets were for The Monster Squad, but I got others who wound up being anywhere from $15 to FREE while splitting.

First up, Jacob Bertrand who plays Eli aka Hawk on Cobra Kai. Nice kid, although his Mohawk was indeed a fake! I then got Tony O’Dell, who was very pleasant to talk with, but overpriced. He did make sure your auto/photos were totally perfect though. Then marked under the “how have I never?” list, it was Mark Boone Junior. For whatever the reason I would skip his con appearances, but he just got to the table so I was first in line. Had a great chat about his many roles and his brief career as a collegiate/semi-pro soccer player. 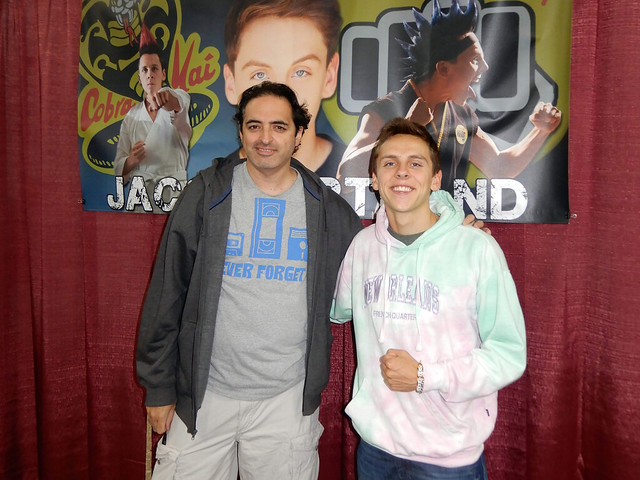 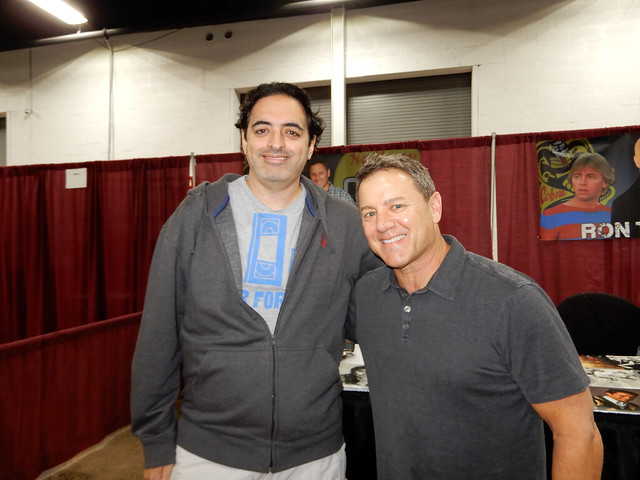 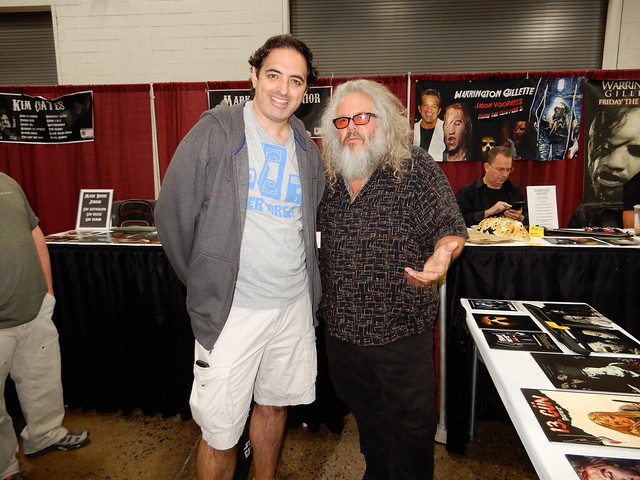 I saw Lisa Fuller, who played the older sis in The Monster Squad show up, so I got the combo from her. The remaining talent I needed was Carl Thibault aka Wolfman but he was not here. In fact, I spent the next few hours very concerned if he’d make it. He canceled previous shows, and was late on this day, due to a medical condition he suffers through. Eventually I did get him, very nice fellow as well. 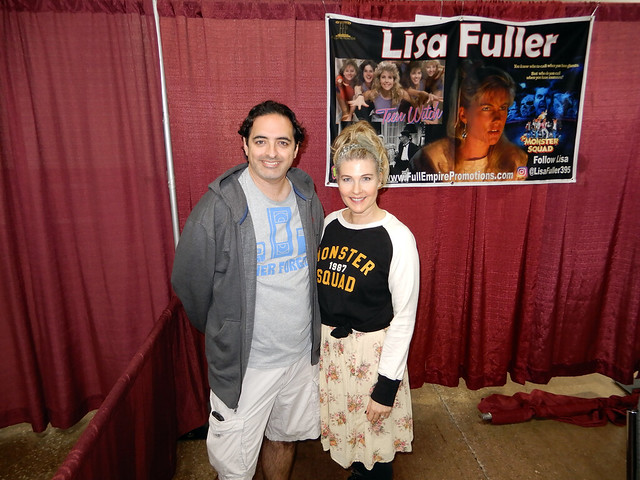 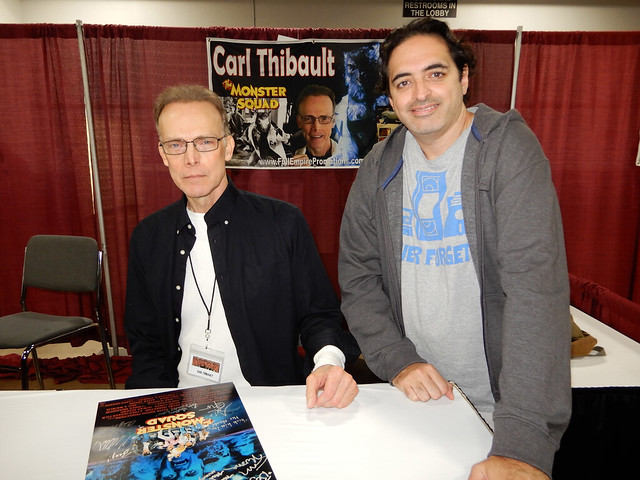 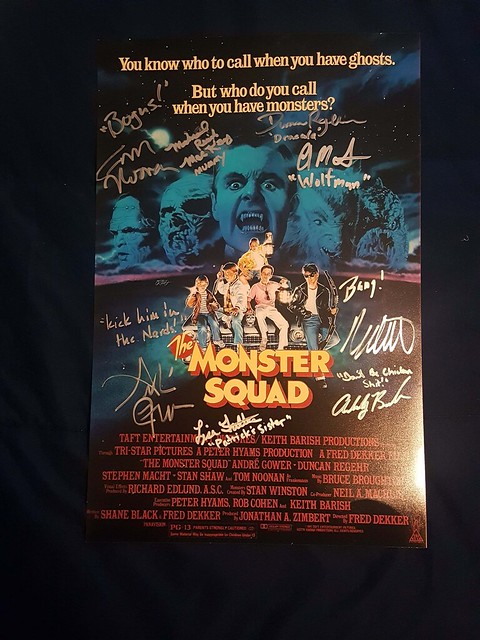 Rounding out the show were the cheapies I did as I was there, and so were they. I loved the old Carpenter classic Christine, about the murderous classic car (red 1958 Plymouth Fury). Keith Gordon, the main star is very rare to find, and John Stockwell for some reason never does cons or anything. But I got photos with William Ostrander, the tough guy, and his jerky sidekick Malcom Danare. Both great to talk to and share experiences on the film. There was even a replica (I think) movie car there as well. 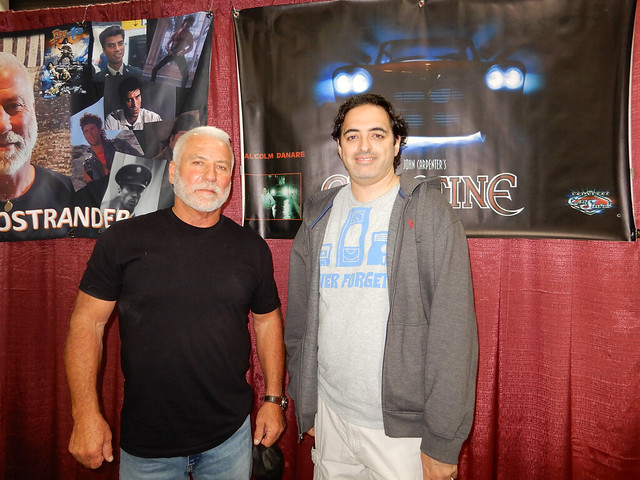 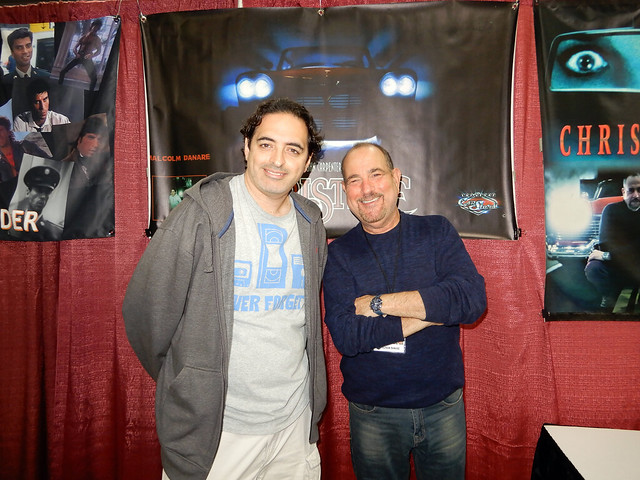 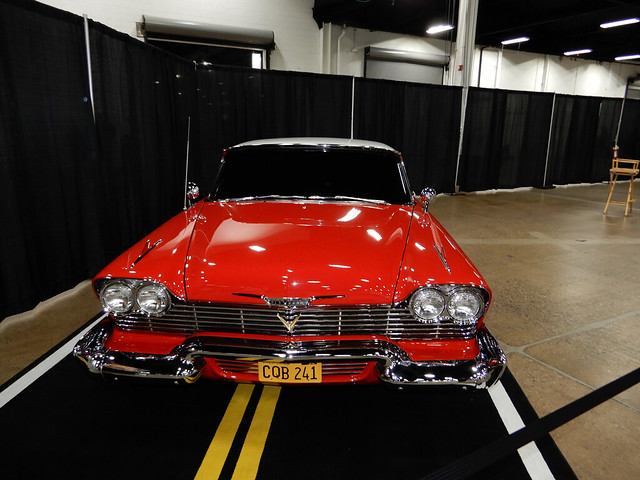 Lastly I split Omri Katz (Hocus Pocus), James Jude Courtney, and Jackson Robert Scott from Locke & Key, and called it an afternoon with just about two hours or so spent inside. 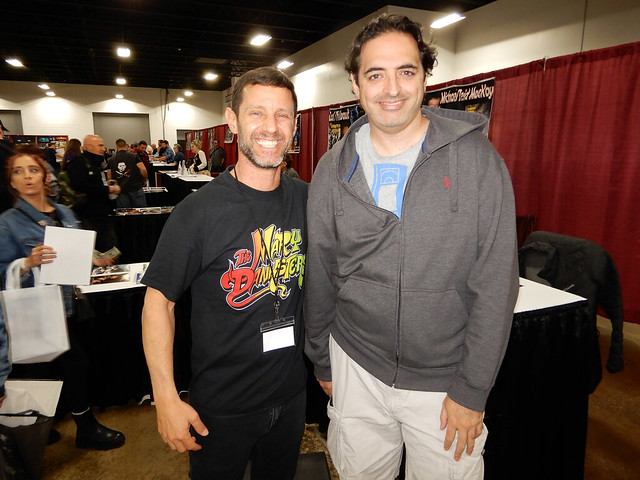 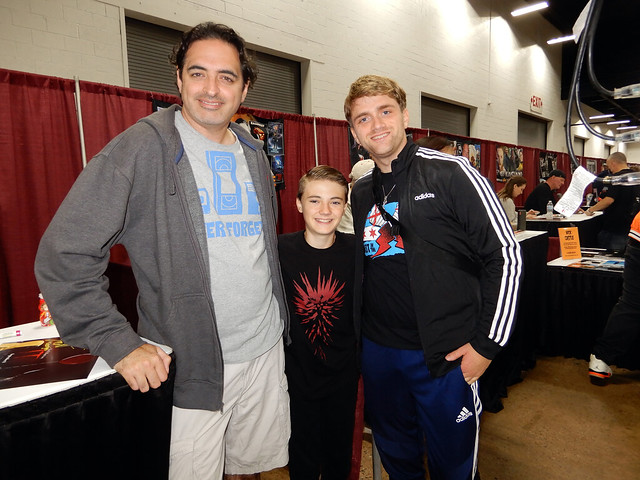 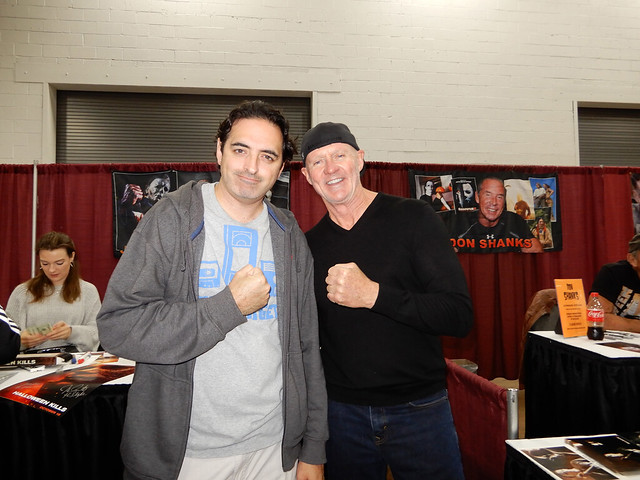 The other major fall horror show I attended was New Jersey again. I had some stuff to do on that Saturday, so I didn’t get on the road for A.C. until well after noon. Didn’t hit much GSP traffic though which was nice, and parked on the street. Walked a few blocks through the strong wind and got in. Ran into a bunch of people I know, and hoped to be done quickly. Sizemore of course didn’t come, which I still think is a phony agent or something. Clint Howard was the big want I guess, but he was at a panel. I started with Lisa Jakub from Mrs. Doubtfire, who was very nice and spoke about cast mates and her latest book. One table over it’s John Capodice from Ace Ventura, who was very funny and we were cracking up at some stuff. I mentioned how for network broadcasts they had replaced Jim Carrey’s “the killer got jealous of the size of the bug’s….DICK” with “bug’s GERKIN” and we were ROFL. He too was an easy $20 selfie. Unfortunately no one else were at their table yet. 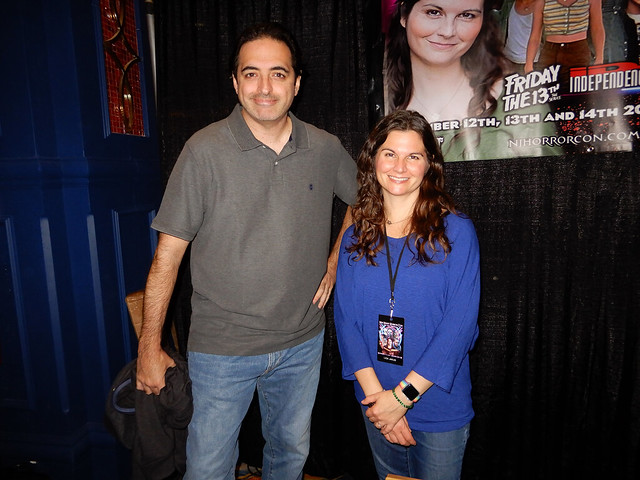 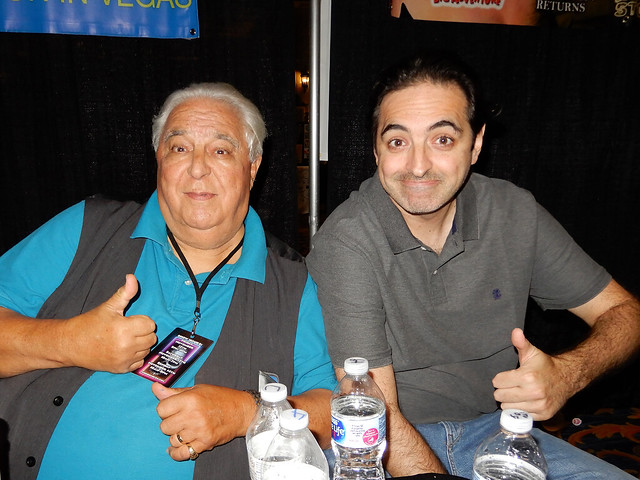 Finally Scott MacDonald returned and I got the photo. He’s appeared in most Star Trek series and is also a big fan, so we got to discuss Trek production for a while. Then I saw Jon Abrahams get back to his table, and went for a $20 pic with him too. After that it was a brutal 2 hour wait for Clint Howard to finally return to his table. He was super nice though, had a few good stories about his recent work on Star Trek Discovery, including a scene they deleted. I mentioned how they wouldn’t allow him to stop for fans in NYC recently. He was pretty upset about that, and wound up doing my op for free! 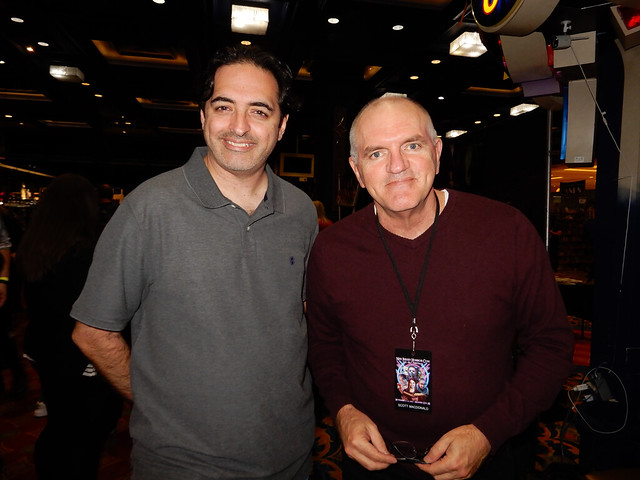 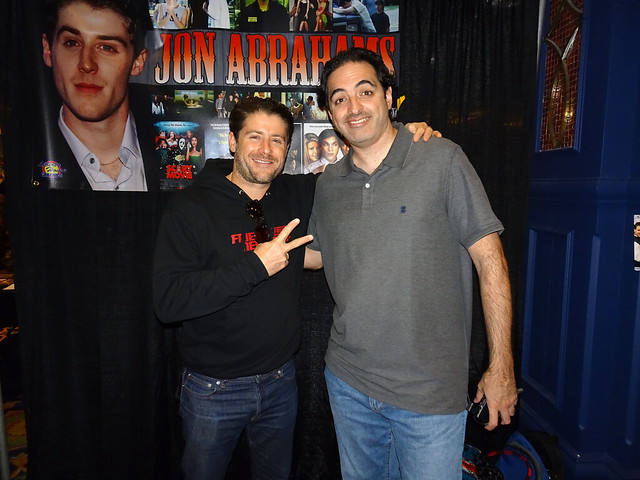 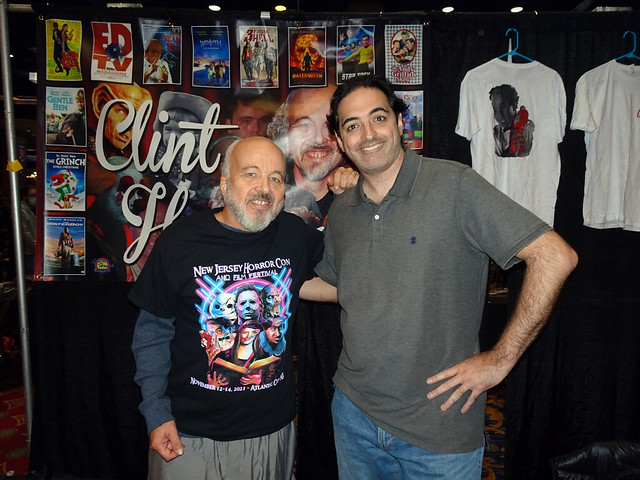 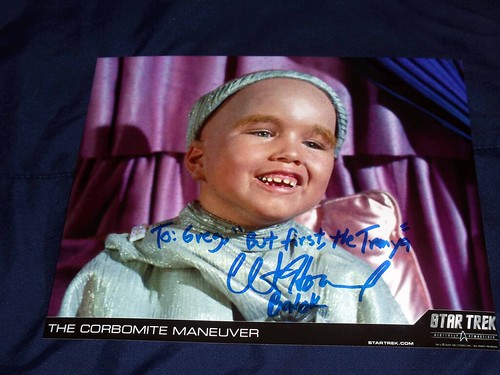 When my friends finished with Clint, we went over to the Hard Rock and got dinner. My next stop was a tad out of the way, but one I wished to do. Comedians Bret Ernst and Dan Ahdoot, who play car salesman Louie LaRusso and Anoush on Cobra Kai, were doing a show in a town I’d never heard of. It was Emmaus, Pennsylvania somewhere near Allentown. That was about a two hour drive from A.C., which became ludicrous as I meandered through a section of forest that required me to use high beams to prevent driving off into the void it was that dark. Eventually got there, but I was now way too late to see the show. I decided to take a leak out back in the woods, when TWO freight trains doing about 90 MPH blasted by me about 30 feet down the embankment. The shock nearly had me whizzing all over my sneakers! When the show ended I slipped through to get a dual shot, and wound up chatting with mikeyicon and his brother, who both attended the show. After that it was back home, totally on the interstates this time. 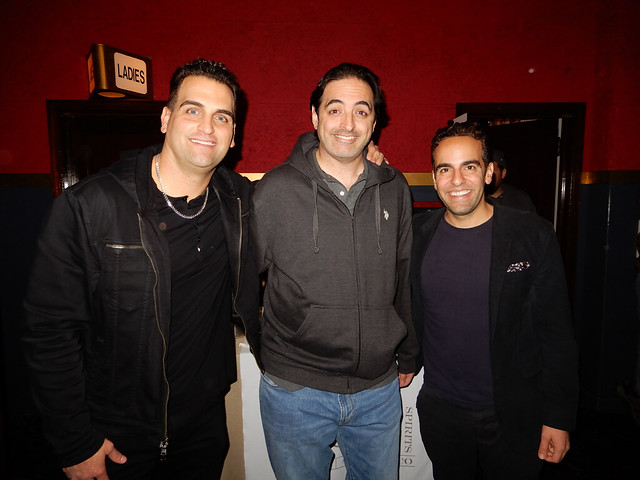 Great seeing you! I too am behind on my reports, I need to do a nice report dump as well. I legit chuckled with the freight train part, BTW!
My collection:
https://www.flickr.com/photos/woodmo/albums
Top

Great seeing you at NJHC... wish I could have joined you for Monster Mania but it was bad timing for me since it was my sisters wedding that weekend.. hope the celebrities I missed make the rounds at other cons (especially Omri Katz) so I get a chance to meet them too
Top
Post Reply
3 posts • Page 1 of 1