I loved night court and he was one of the main reasons, but he was in so many other things. RIP 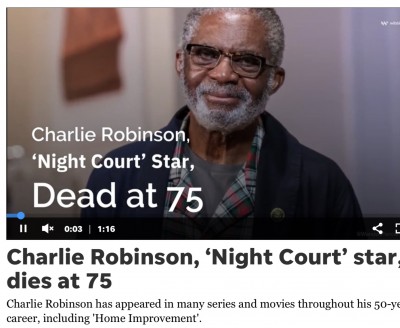 The early episodes of Night Court were god awful to me, the writers obviously had no idea where to go with the show though long term actors Harry Anderson, John Larroquette and Richard Moll were obviously the best of the bunch. It really wasn't until Charles Robinson got added, then Markie Post that the show started catching steam and add Marcia Robinson and you have the amazing group of six that lasted the rest of the run.

So a lot of credit should go to Charles. He was more of a straight laced character but could be funny without trying too hard. He was more funny in a serious way, calling out things that were silly. Once the main six got started all together the show became timeless. I'm sorry the two older ladies passed but their comedy was dated back to the 1950s in the 1980s so those episodes really don't hold up well now and though the early female love interests of Harry did a good job, the chemistry for a long term thing chemistry wasn't there.

Again, lots of credit to Charles. He probably got the least amount of on screen time but helped really glue together everything. He also was on John's Hallmark movies "McBride" playing a Judge. They didn't have much interaction but it was cool seeing them back together.
Book WWE Hall of Famer Jimmy Valiant for your event!!
PM me!