greatest quarterback of all time? even those tom brady is good i'm sticking with 80's joe montana

your thought? other names? 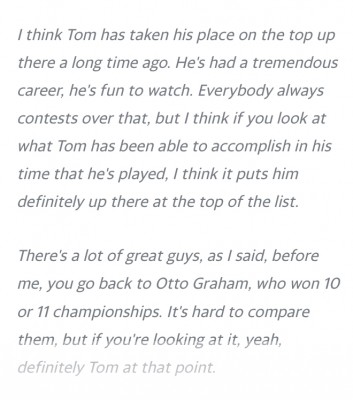 Re: OLD GOAT VS. NEW GOAT

Tom Brady is like a wrestler to me. When I was younger I loved to see him lose. I couldn't stand him always winning. He was like a 1980s, early 1990s Ric Flair to me. I marked out hard when the Giants ruined his perfect season in the last few seconds of the Super Bowl. But now, being a bit older, I can appreciate just how great he is and I do enjoy him winning Super Bowls and winning throughout the season. He's beyond a legend. He's probably in his own class of legend. He's a mount rushmore of football or sports in general.
Also, him being a generation younger than the 1972 Dolphins and actually winning more games than that team (yes, I know a different time so not as many games then) and seeing these older guys as just grumpy old guys praying that what they have of a legacy isn't ruined by Tom, I am a bit disappointed in myself for being so happy he lost that Super Bowl. He won more games but without that last win it doesn't equal or surpass that 1972 team in football history. But again, Tom has written his legacy. I would hate to see him retire without winning a Super Bowl but I enjoy seeing him keep going. If his body is able and his performance allowed I would love to see him go into his later decades like wrestlers do.
Book WWE Hall of Famer Jimmy Valiant for your event!!
PM me!