This is the place to post reports from in-person meets!
Forum rules
DO NOT post the location for on the street meets. To keep the spots from being too crowded, we don't allow locations to be posted. You may only post location details about pay meets and organized free signings.
Post Reply
6 posts • Page 1 of 1

Hit up the 80s Wrestling Con in NJ last Saturday. In and Out real quick, a few hours in. Chatted with Chad aka HorrorBBQ and Mikey Icon. They had indie wrestling going on all day in the ring, which was cool, and some funny old school cosplayers.

My primary want here was the Reverend Slick, one of the legendary managers, who I just never got/saw at cons lately. Slick was having some lunch, and finished and was very gracious. Another manager I for whatever the reason never got was Dutch Mantell, who like Slick was $25, so I bit. 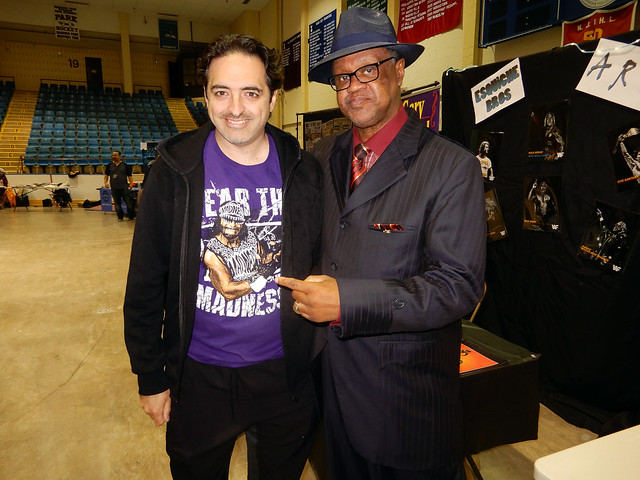 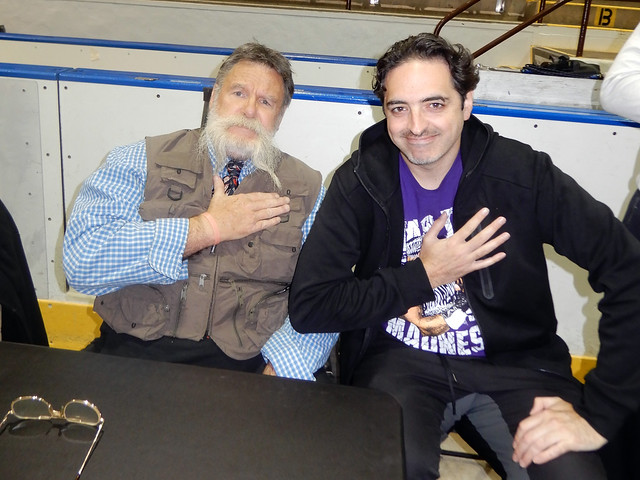 I saw that they had a Conquistador there suited, and I had to double check with experts such as Lucas aka latinoheat to be sure it was the real dude, ha ha ha! In this case it WAS Jose Luis Rivera. 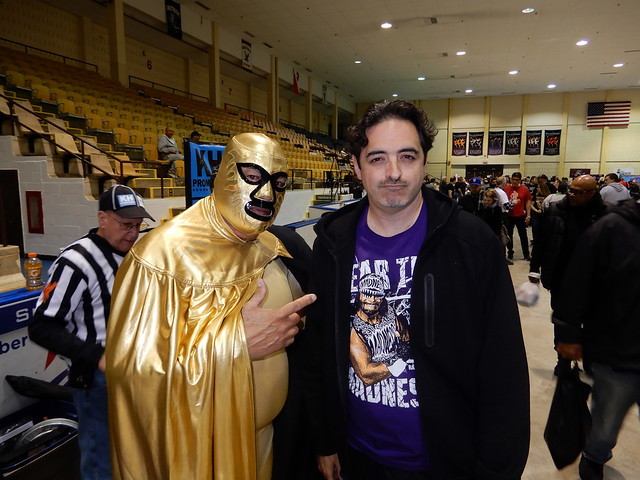 Mikey convinced me to split a Cheryl Roberts op, and Jake happened to be sitting there with nowhere to hide, ha ha. 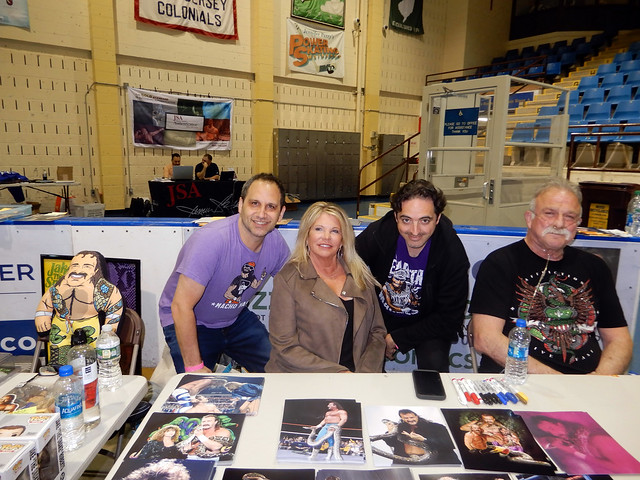 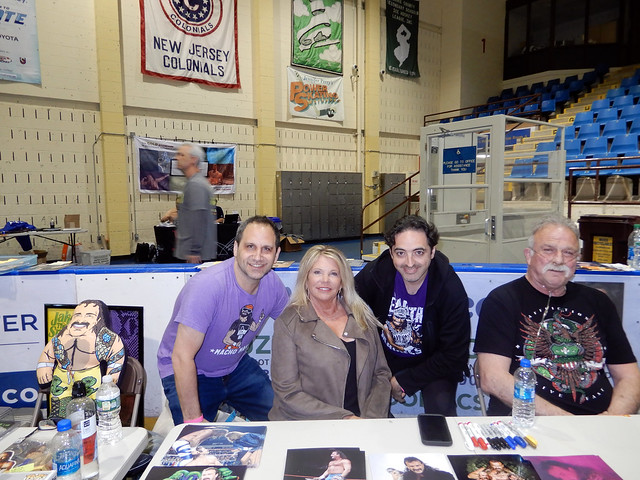 Last but not least I wound up chatting with local indie female wrestler "Vicious Vicki." Her family actually lived 2 blocks away from mine in the 80s/90s, and her oldest sister and my sister were classmates. I of course got the hometown selfie. 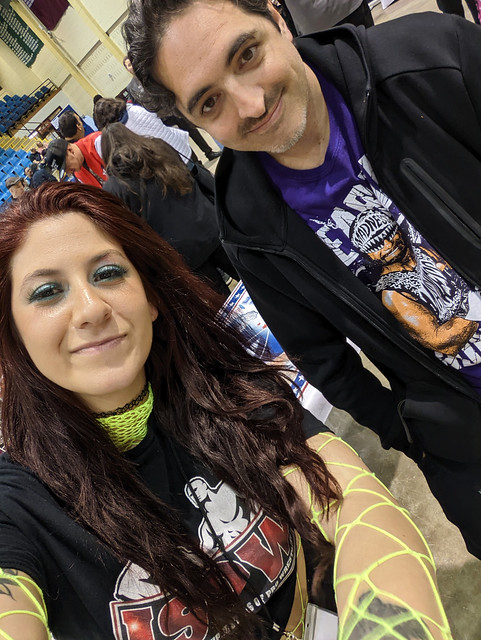 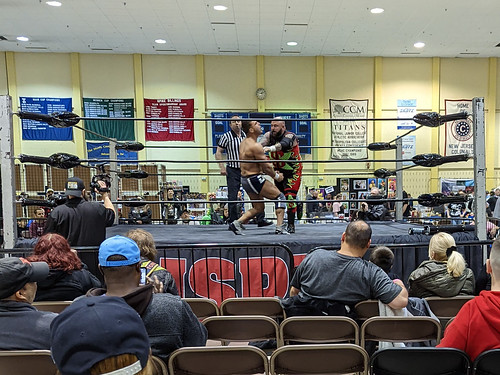 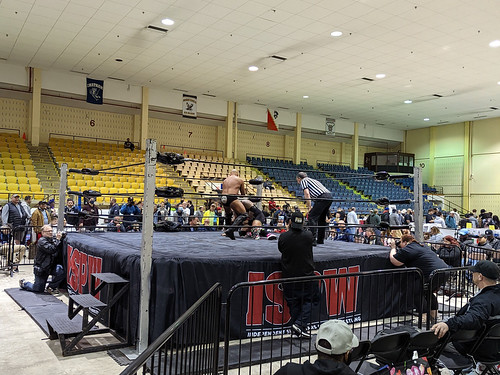 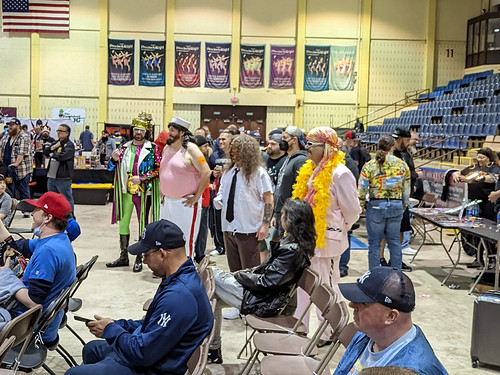 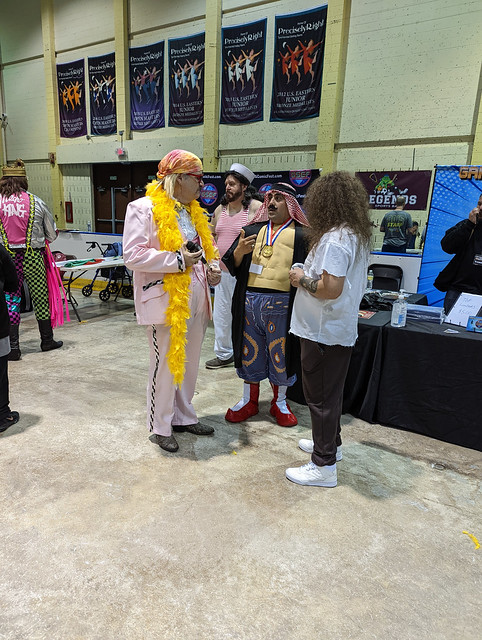 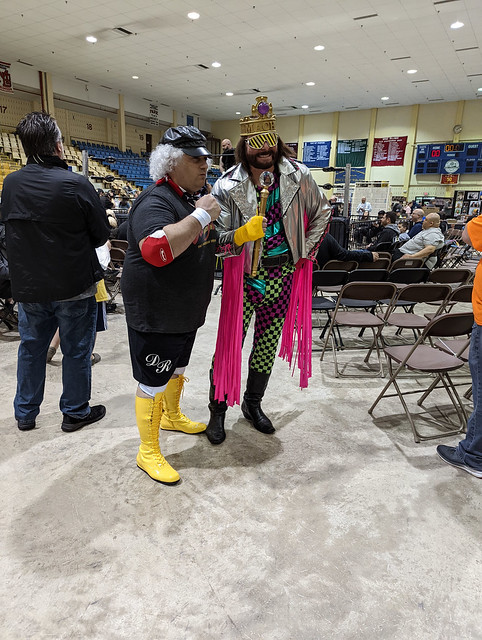 Must have just missed you! I was there in the morning/early afternoon (largely because it was advertised that Slick would be singing the eternal jam "Jive Soul Bro," but I either missed that or it never happened) and also got photos with Slick and Conquistador #1/Jose Luis Rivera (also with the Earl Hebner background bonus!), plus one with Barry Horowitz. A quick, fun morning. The cosplayers were great, especially Wrestling Album Jesse Ventura. Jacques Rougeau seemed to get a big kick out of them too.

billysparrow wrote: ↑May 10th, 2022, 5:36 pm Must have just missed you! I was there in the morning/early afternoon (largely because it was advertised that Slick would be singing the eternal jam "Jive Soul Bro," but I either missed that or it never happened) and also got photos with Slick and Conquistador #1/Jose Luis Rivera (also with the Earl Hebner background bonus!), plus one with Barry Horowitz. A quick, fun morning. The cosplayers were great, especially Wrestling Album Jesse Ventura. Jacques Rougeau seemed to get a big kick out of them too.

I got there around 12:20, had errands beforehand. I asked Slick about the karaoke, and he exclaimed his was "pretty damn bad!"
The Paunch Stevenson Show pop culture podcast
Top

Excellent stuff! Definitely a valid group photo on the Roberts on the cheap, well done!!
My collection:
https://www.flickr.com/photos/woodmo/albums
Top

First off, thanks Greg for our first combo together, I think we got our value with Jake The Snake in the photo which I think was ridiculous that many I'm sure paid for. A true honor...

As a fan of these 80's wrestling cons having gone to the first two in Freehold before Covid took over, I was expecting this show (which I appreciated was down the street from my house) would be jam packed due to having Jesse The Body Ventura. But it was really low-key which I always prefer. The last two were also low-key, but they offered a value superticket for like $150-$200, you would get an autograph and photo with each and every talent besides any vendor guests. It was a win for the promoter, it was a win for the fan, and it was a win for the wrestler to each earn money and time to be appreciated.

There was no superticket this time around, meaning a lot of these guys were standing holding their thumbs and not earning a dime while the usual guys like Ted Dibiase, Jake The Snake, and Jesse Ventura were going to get the most action. Very sad to see guys like Mario Mancini, John Tatum (who I had a had great chat with about the wrestling biz), Steve Lombardi, and Barry Horowitz standing around doing nothing. I imagine Tommy left a lot of money on table as people who go to these things have a limited budget and aren't going to pay for $40 combos with the low-tier guys once they spent on the key guys. Just my thought, I hope they do another one, as I appreciate the location, the low-key atmosphere, and having great convos with the talent, but I don't think the turnout justified doing it again. We'll see.

As for Karaoke, before he was set to perform, I asked Slick if he was ready and remembered the words. He joked and said he didn't and hadn't sung Jive Soul Bro in many years and began searching for the lyrics on his phone. He did perform but it was awful and more a lip sync performance. There were only three karaoke performances and I'm not too tech savvy to include the video links on here. The guy with the Rougeau brothers sang their theme song first.. Of course, yours truly ie ME sang his heart out to Girls In Cars dedicating to Tito and Rick Martel and Robbie Dupree. And the show was stolen by the Cosplay Dusty Rhodes singing American Dream.
Top

Great stuff Greg. I believe the guy cosplaying as Dusty was at the WWE show in Trenton that night & Cody loved it.