This is the place to post reports from in-person meets!
Forum rules
DO NOT post the location for on the street meets. To keep the spots from being too crowded, we don't allow locations to be posted. You may only post location details about pay meets and organized free signings.
Post Reply
8 posts • Page 1 of 1

This is my first report in several years here - soon to come are: Wrestle Kingdom 2020, WrestleMania 38, and AEW Double or Nothing (with a picture of the year contender) - and it’s a report from this past weekend. I think everyone here who knows me know how much I love Hulk Hogan. In 2020 I bought tickets to meet him during WrestleMania week, but we all know what happened there.

During the last two years I’ve started to really focus myself on autographs. I regret not going into autographs WAY earlier, but I can’t turn back the time unfortunately.

Since travel has been allowed again, I’m trying to make up for lost time the last two years. I’ve went to WrestleMania, Double or Nothing, and plan on going to Summerslam next month.

I planned a trip to Forbidden Door about 2 months ago, quick in and out trip to Chicago, but as luck would have it, for the Saturday that weekend, a Hulk Hogan signing was announced in his beach shop in Clearwater. I promised myself before that the next signing Hulk Hogan was going to do I was going to attend, as he’s not doing them this much anymore, he’s getting up there in age and his health wasn’t the best. So I bit the bullet, and booked flights and tickets for the show.

Saturday morning I flew to Tampa, got an Uber, and went to Clearwater. I arrived around 12.30pm, there was a line of about 50 people, and since the signing wasn’t until 2pm I went to the Hogan Hangout bar next door for some food. One hour later, there were about 300 people in line. The line went all the way around the shop into the parking garage, where it was bloody hot, no airconditioning, and no water to get. About 45 minutes later there were a total of 500-600 people in line, and Hogan still wasn’t there.

Around 2.45pm, a huge black truck pulled up and it was the Hulkster himself, getting out and apologizing straight away for being late. The line moved very slow at the beginning, but started moving quickly an hour into the signing as they were running out of time. It was my turn around 4.15 for the Hulkster, and he was cool as usual. Recognized me from over the years, said he loved the shirt (think he says that all the time when someone wears one of his shirts haha) and started signing. I bought a premium ticket, an additional premium ticket, and 6 other items. Unfortunately, he just signs normal items as ‘Hulk Hogan’ with no personalizations or inscriptions. On the other hand, he went all out on the premium items with his inscriptions. If I would have known this before hand, I’d probably have bought quite a few more premium items. Here are the pictures and signed items. 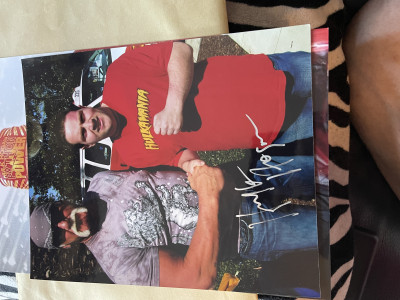 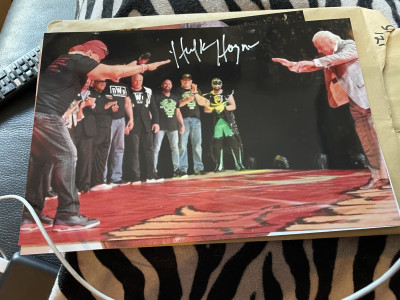 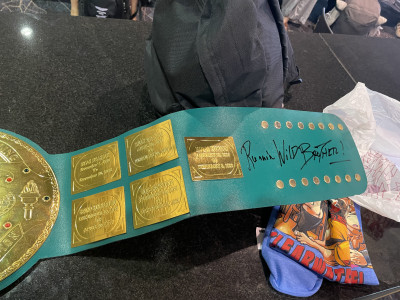 Great way to return to the boards Bobby, the Intercontinental Wrestling Collecting Champ! The belt and seat back are awesome. I saw someone post a similar WMIII seat back that Hulkster signed also with a ton of inscriptions.
The Paunch Stevenson Show pop culture podcast
Top

This was awesome. Love the cartoon posters.
Top

These are awesome!! Love it bro, great job as always. Those seatbacks are works of art the way Hulkster fills them up.
My collection:
https://www.flickr.com/photos/woodmo/albums
Top

Still wild to me that Hulk Hogan was 25 dollars a pop at TNA shows 10 years ago.
Top

To be fair, that's more indicative of the messed up TNA model than his actual value at the time. I paid closer to today's prices for a photo with Hulk 14 years ago, which was standard.
My collection:
https://www.flickr.com/photos/woodmo/albums
Top

When you think about tna, at the Bound For Glory fanfests they had a 200$ ticket which included one pic and TWO autographs from the entire roster, including Hogan, Flair, and Sting. Amazing when you think back about it.

@Woodmo thanks man. I was a bit disappointed he signed the posters as just Hulk Hogan but the inscriptions on the premium items more than made good for that. Hopefully he does another one soon
Top
Post Reply
8 posts • Page 1 of 1